I’m cooking mashed potatoes to dress up some leftover chicken. I’m supposed to have them done when the girls get home from swim lessons in about half an hour. We’ve got some small potatoes out of the garden, so I’m good to go there.

Now everyone I’ve ever talked to about mashed potatoes is adamant about one thing: you’re supposed to drop the spuds into cold water, then bring it to boil. No one tells you why, they just tell you to do it. Which smacks of bullshit in my book. Plus, I don’t have that much time. I’m sitting here staring at the pile of ‘taters and the pan of water and trying to figure out how much it could fucking matter?

So I drop the pot on the stove and crank on the burner. Then I start peeling. This is efficient. This feels much better. Like reading and talking on the phone while taking a dump.

I’m not making many potatoes, since there are only the four of us. As it happens, the water is boiling just about the time I finish peeling. But I’ve spent that multitasking time trying to figure out how much it could matter if the water is cold or hot to start. I mean, will anyone even notice? It occurs to me that answering questions like that is sort of what I do for a living.

I grab a second pot and fill it with cold water. Then I chop each potato into chunks and carefully separate them. I’ve got 2 equal piles, which I should have weighed. But didn’t 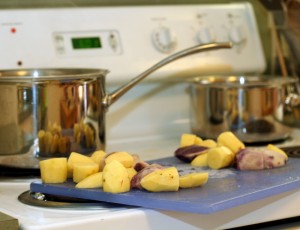 One pile goes into the cold water and the burner goes on (not the burner the pot is sitting on, as I find out later, but I escape serious injury). The other goes into the boiling water. I give them 15 minutes and go check whether I’m making this up.

Joy of Cooking: start water cold. No explanation.
Cooks Illustrated: They babble on a bunch about the shape of starch molecules and how you need to add the butter before the milk, but they also don’t bother to tell me why I must start with cold water. They tell me to do it, but not why. I’m glad I’m doing this experiment. Then I remember that I’ve got Harold McGee.

If anyone will have an explanation, it’s On Food and Cooking, and he does. Apparently, when certain vegetables spend 20-30 minutes between 130-140°F, they “develop a persistent firmness that survives prolonged final cooking.” And the problem with boiling potatoes, as McGee goes on to point out, is that the outside gets mushy before the inside is done. And that’s, apparently, the point of starting them cold so they spend some time in that temp range while the water heats up.

It makes sense to me, actually, but I still think it might not matter for my situation. For one thing, it’s a small batch. My cold start pot was boiling about 7 minutes after I figured out what burner to set it on. For another thing, I’m mashing these.

I’m wishing I had a copy of Modernist Cuisine… they might have something to say about this. But as I don’t have a spare $500, I carry on with my research.

I check the potatoes. Hot batch is done is 17 minutes. By this time, I remember that I’m doing an experiment, so I measure. I drop in 1 Tblsp of butter and swish it around a bit. I don’t know if I believe the stuff in Cooks Illustrated (they say this coats the starch with fat or some shit), but I know I like butter in my mashed potatoes. I add 3 Tblsp of buttermilk and 1/8 tsp salt. I mash. They’re pretty good.

By now, cold batch is coming done. I drop in the same ingredients. Also good. Salt and butter; hard to miss.

I’m writing on the dishes with a sharpie when everyone gets home from swim lessons. I remember I forgot to cook anything but potatoes, so I start re-heating chicken and throwing some green beans on the stove. I serve everone 2 lumps of potatoes with A or B written next to them. 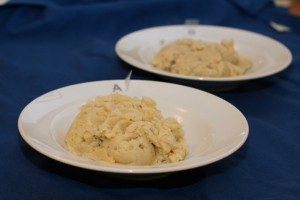 My tasters are: my wife, who’s pickier than me. Eliza, who, at 6, also has strenuous opinions about what she will not eat. and Tessa, who at 3, wants to be a chef.

The girls like this experiment plan. Eliza decides we each need 2 forks, so we don’t see a fork effect. They dig in.

Suzanne likes B (hot batch). She says it has a better texture. Eliza likes A (cold batch). She says that’s because sometimes you find chunks of salt in it. I’m not sure if this is true, but if so, it’s certainly an uncontrolled variable. Tessa says she likes them both the best but she likes B (hot batch) best because she tried it and it was yummy.

I’m kind of indifferent myself. In a blind tasting I probably would have chosen A because they were slightly warmer (another uncontrolled variable… maybe I’m a shitty scientist). On the other hand, neither batch were the best mashed potatoes ever made… I think it’s really hard to make a tiny batch of mashed potatoes without them getting too dense. I wish I’d put in more butter, too.

But, the upshot of the experiment is to confirm my general theory that I can knock 5-7 minutes off the cooking process without suffering an obvious loss of quality. The mashing too much and adding more butter could both have been fixed on the hot shot.

Get a big pot of water on the stove to boil, then start peeling the spuds. [There are those who advocate leaving the skins on, but that just isn’t my bag. There are others who claim that you should boil them with the skins on, then remove them while still hot. I’ve tried it. It’s an ass idea and a great way to burn the shit out of your fingers.]

Chop them up into chunks about 1-2″ on a side. Smaller means faster cooking, but gummier potatoes. Dump them all into the boiling water (also a great way to burn yourself). Give them about 15 minutes. Check for done by sticking a sharp knife into them… it should come straight out with only a tiny resistance. If you pull the chunk out of the water with the sharp knife, they need more time.