It’s Friday afternoon in December, normally a slow time on the water. But I’m hearing the steady buzz of boats like it’s 4th of July. Instead of ginormous yachts with the G&T set aboard, though, these are 25′ open boats with ginormous outboards and quivers of rods at attention. These are fish killers. And no wonder; it’s derby time. There’s a 100 boat shootout coming into the harbor this weekend to do their best. I’ve got two problems with this sort of fun. In the first place, I don’t have a boat, nor the means to get one. In the second place, no one else wants me on their boat because I’m the world’s worst fisherman. I don’t know what it is, but fish can smell my worthlessness from 50 fathoms. I shit you not. Back in grad school, I had the use of an awesome fish killer courtesy of my brother who had a boat but no time to use it. I’d wake up Andre, who made a living catching big-assed tuna (though not killing them), and make him load up rods and bait and stuff. We’d go fishing. Mostly he’d fish while I’d peck irritably at the fish finder or maybe try to re-arrange the down rigger I’d mounted on the rail or maybe rewire the motor. He’d gallantly chat with friends on the radio and then waste their advice by bringing me along. On one memorable occasion, He directed me towards a similar boat full of his friends. We followed it, maybe 50 yards behind, towing the same bait at the same depth and watched them haul 2-3 limits aboard. Our take: shit. When Andre got bored hanging with me, he’d saddle up his junkyard Livinston with a 9 HP motor and limit out in a couple of hours.

So, watching the derby get to the starting line made me feel both wistful and hungry. Clearly I was prevented by both finances and temperament from doing anything about the wistful. But I’m not so broke that I can’t get fish the cheap way: paying top dollar at the fish market. I walked down the ramp to the place on the dock and dropped $18 / lb on some salmon caught in Alaska weeks ago. But all that mattered to me was that it was caught, instead of having swum by my hook an hour ago giving me the finger. This one was in the bag. It did occur to me that if I’d showed up at weigh-in, I might have found a friend with more fish than cooler space, but I had company coming.

And mankitchen still had to cook it.

I’ve cooked some good salmon over the years. While it’s true that I am a shitty fisherman, every now and then, I’d snag one on my anchor when I went diving or something… 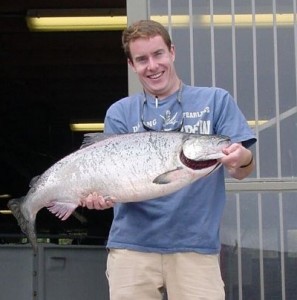 So I’ve cooked a few of them. And one of my favorites is an idea I got from somewhere to cook them on a cedar plank. I’ve even found a great glaze. I really like cooking this fish this way. Only problem is that I was out of cedar planks. Back in my occasional-fish-killing days, I once picked up a brick of special fish planks at Costco for $10, and it had held me through to this point. But I was out. And I’d been to the fish market, so I had dinner to cook.

My first stop was the local Ace, which is close and carries this sort of stuff. They offered me a shrink-wrapped bundle of 2 what looked like 12″ 1/2x3s if such a board exists. They wanted $8.99 for the pack, which seemed absurd, but I had to deliver dinner. Then, while shopping more, I ran into my friend, Scott, and we talked about my dinner plans. He had the great idea that I should use cedar shingles. In fact, he had a whole bundle of them that I was welcome to use. Only problem was that he lived out of town a ways and I had that dinner to get on. He agreed to bring some in to work on Monday, and my brain-wheels started turning. Next stop, the big lumberyard on the outskirts of town. They’d have the shingles.

I pulled in to Browne’s and asked where they kept the shingles. At the counter, she directed me to the contractors’ desk and they set me out to the yard. The yard guy and I chatted about what I needed, and I could see the dilemma in his face. There were bales and bales of shingles in the shed at $25 for a huge bundle. They looked ideal for my purposes. There were also many, many scraps of shingles that had shimmied  from their wrappings and now covered the ground. Both me and the yard guy knew those would get chucked at the next clean up. I only need one. His radio squawks: “Tell the guy looking for shingles that we have them in the BBQ section.” Damn. No way to give me free shingles now.  The yard guy shrugs. I head in. Only here, it’s worse. These fuckers want $10.99 for the same package. Two thin boards. 11 bucks. I’d rather buy the bale of shingles.

Instead, I grab the phone; someone’s got to have cedar. Justin’s out, but Neil picks up. No shingles, but someone gave him some cedar planks wrapped up for bbqing and he doesn’t know what to do with them. Fair enough; I’ll forward him this post. But in the meantime, I’ll borrow one of those planks.

We cook up the fish and it rocks… I mean, awesome. 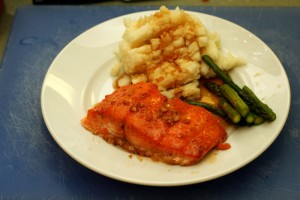 But that $10.99 cedar plank gnaws at me. Why not buy a big bale of shingles and spread the wealth? On Monday, Scott remembers. He’s got a pile of them for me. Now I just have to use them. Fortunately, we owe Justin and family dinner.

I buy another slab of salmon and cook up some more glaze. Last time it was a little watery, not reduced enough, but this time I boil it down until it is about molasses consistency. It’s a big improvement and it sticks to the fish a lot better while I’m grilling.

I soak the shingle for 30 minutes or so, then toss a few green onions on top and pile on the fish. 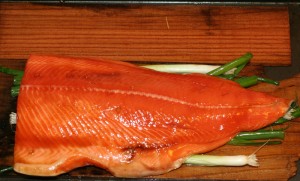 Justin and I crack a beer and have a brief discussion of whether the shingles are treated with some sort of flame-retardant crap. Wife is worried. I’m from the fireplace that is California, so I admit it might be a problem. Justin has never heard of such a thing, and he’s put a lot of roofs on houses. They smell fine. I’ve got the gas Weber heated up. Fish on. The fish hangs over the shingle a bit, and I’ve got a spare piece of wood sitting there, so I tuck it under. I know it’s probably a mistake, but I’m thinking I might get some more of that cedar smoky goodness. I do — in spades. 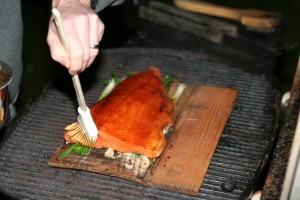 About every 5 minutes, I go out and baste it with a bit more of the glaze. By 20 minutes, the under-shingle in nicely charred and the backup shingle is on fire. 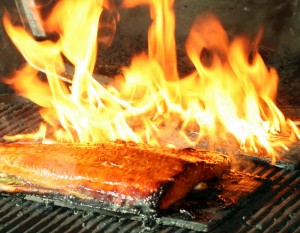 We pull it off and I boil down the sauce a little more. Damn. This is good. Next year, any salmon derby contestants who want to stop by, I’ll grill up your fish. 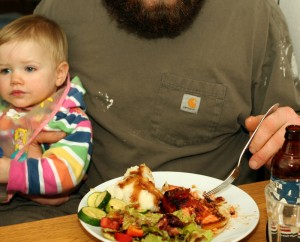 This glaze comes from

Boil this mix until it’s pretty thick. Soak your shingles in water for a bit (it delays the moment they catch on fire) then toss a bunch of green onions on top of the shingle and lay the fish on ’em, skin down. Pop the shingle on the hot grill and slather with sauce every 5 minutes until the fish is nice and flakey… probably about 20 minutes.
Serve with mashed potatoes. Top the fish and potatoes with the glaze. Good stuff.