Not surprising, but BBQ is one of the things I’m about when it comes to food. I don’t mean that in the I’m-the-man-of-the-pit-so-back-the-fuck-off sort of way. More in the “I’m hungry, I wonder if there is a BBQ joint around here” way. When I’m doing the cooking, it’s a great way to combine wanting good eats with wanting to build crap to cook with.

Now, I need to address this “what is BBQ” thing… I know there are those who bitch that there is only one thing that deserves to be called BBQ… sometimes, that definition includes a bright line like “If you put sauce on it, it ain’t BBQ.” Whatever. Sounds like bullshit to me. I’ve had fabulous slow cooked meat that clearly deserved the title of BBQ, but then I’ve also had some awesome NY steak cooked on a metal grate over a chunk of oak my brother found in the forest. So I was really happy to find a book that clearly articulated what I’ve always thought about the various distinctions. In this, the guy lays out that there is Yankee BBQ (high heat grilling) and Southern BBQ (slow cooking). And both are good.

This book, Serious Barbecue: Smoke, Char, Baste, and Brush Your Way to Great Outdoor Cooking is seriously the shit. I picked it up at the library because I was looking for ideas to add a little more flavor depth to some BBQ sauce I’ve been making. After making the first thing from Adam Perry Lang’s book, I a) bought it on Amazon because I want to make more stuff, and b) decided the man is my new hero. What’s more mankitchen than shoving a spit through a whole pig and roasting it outdoors with a hundred and fifty pounds of charcoal? He also argues from behind a prize-winning pit that barbecue is a broad tent from which a lot of good food emerges, cooked a lot of different ways.

So, what sold me on this book? The pork butt. I’ve made a lot of pork butts… and I have yet to complain about any of them. I always knew, though, that I should kick up my game to make them something I could really be proud of, and this one kicked it up alright.

Start with the injection… mixed up apple juice, brown sugar, water and salt (plus some soy sauce since I didn’t have the Japanese stuff he recommended). Filled up a 60 cc syringe with it, added a pretty big needle and jammed it in there. It was actually harder than I thought to push liquid in, and I could watch the meat blow up like a balloon. Every now and then a fat line would rupture and apple juice would spray around the kitchen. I’ve gone for brinning, but always thought injections were a way to sell more crap at the bbq store. Now, I’m pretty sold.

Then there was the rub… well, first there was a “mustard moisturizer” which sounded lame, but I’m not complaining anymore… it worked to hold a lot of the rub on.

I stuck it in the smoker at about 10:00 PM. Used a bunch of apple chunks. Kept it going at 205F overnight, getting up a few times to add more wood and spray it down with an apple juice and water mix he recommended. In the morning the meat was sort of stuck at 150F, so I bumped up the smoker temp to 225F… it got up to 165 by about 11, whereupon I wrapped it up in foil into which I dumped a sauce mix. Back on the heat up to 195. Then it came out and spent an hour in an ice chest to rest. I pre-warmed the ice chest with a quart of boiling water… not sure if it helped, but the meat didn’t drop much in temp during the hour. Then it was out of the cooler, out of the foil and back into the smoker for a bit… holy crap, it was also when I got to taste it. The outer glaze tasted like candy and the meat underneath was even better.

Finished up with a sauce glaze… and the sauce made me super happy, too. It’s ketchup based, but not so much ketchup that it just tastes like Heinz. He has some crap about grating the jalapeño with a microplane, which seemed like a pain… next time, I’ll just add it earlier and stick blend it. But overall, the meat and the sauce have the sort of deep, complex flavor that I’m proud to serve.

Here’s the temperature profile from this bad boy. 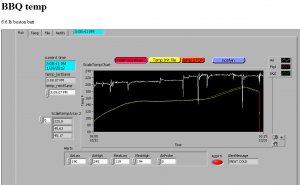 1 thought on “The Sauce”