Camp cooking sums up what Mankitchen is all about. 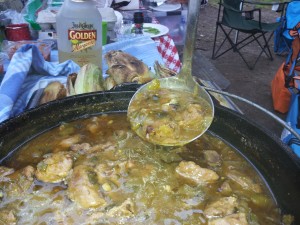 I remember going backpacking one time with some people I didn’t know very well. They were way more serious about it than I was, and had all sorts of lightweight titanium gear, etc. We set up to cook dinner and they were a little puzzled as I pulled out a bunch of spice containers. They were downright horrified when I pulled out a can of beans and some cooked chicken. The can of salsa just about put them in shock. They were eating rice and some protein bars or some crap like that. We were only walking maybe 20 miles over 3 days right next to a river, so I don’t know what they were worried about! After they gave me a ration of crap, they then sheepishly asked if they could borrow some chili powder because their food tasted like shit. I think I won that battle. But maybe lost the war when I strained my knee humping my 40 lb pack and needed to borrow a Vicodin to hike out. Still, I ate better.

These days, I don’t backpack, I camp. I used to get a lot of pleasure making everything fit in my 2500 cu in pack… deciding whether to bring the outback oven so I could bake a cake on the trail, for instance. I don’t get the same thrill jamming my memory foam pillow into the Prius, but I still like cooking with what I remembered to bring and what I can scare up.

Which brings me to this summer’s camping trips. I’ve got a pretty amazing group of friends these days. People who like to camp even more than I do. And people who have trucks and mini vans and things like that that can haul stuff. So as soon as we get to the camp site, there are actually 3 separate kitchens set up and ready for anything anyone wants to cook. Since I have no room in my car, and my stove is an MSR Whisperlite, I don’t even bother to get my kitchen gear out of storage. Our camp site certainly doesn’t need a 4th kitchen fighting for business.

But I still want to do my share, so last time, I decided to try making some green chili pork. This is one of my favorite things to eat, and one of the things about California that I miss most in Washington, where the Mexican food generally sucks.

On our last trip, I decided to give it a try. My brother was raving about dutch oven cooking as the thing to do while camping. I was kind of rushed, though, so I just downloaded a recipe from the interwebs that claimed to be the thing to make in a dutch oven (actually, the guy was raving about his Le Creuset).  I ran home from a hike, chopped everything up, dumped it in the dutch oven and piled a bunch of flaming wood on top. This is macho and all, but a stupid way to cook. When I got back from a beer run, Neil was laughing at me. The pork had been smoking and they’d dumped a bunch of extra broth in. I lifted the top and most of the liquid was gone. It looked a little burned around the edges, too. I poured in a Pacifico, opened another for the cook and took it as it came. As it happened, that meal was pretty good. It had a smokey flavor that was not bad at all. And pork shoulder is just plain awesome, even when the recipe is lacking.

Getting ready for this weekend’s trip, though, I wasn’t inspired. Neil and Ivan had a plan to go crabbing on Saturday and we were going to eat well that night. All I had to think about was a steak for my crab-allergic wife and prepare to answer questions from the kids about crab anatomy. Then I went looking to get my fishing license and realized that the season didn’t open until Sunday at 07:00. Doh!

We talked about this on Wednesday and had to readjust. I was kind of pleased when the consensus was that I should just make the pork chili verde again. But this time, I was determined to do it right.

I read a lot of recipes, and realized how far from the mark I’d been last time. I mean, the previous recipe didn’t even have tomatillos? In retrospect, using tomatoes in this dish should have been a red flag if you know what I mean. But I was in a hurry. This time, I found some good advice from a bunch of sites, not paying any attention to cooking method. I figured I’d wing it.

At cooking time, I headed back to camp leaving everyone at the beach. It’s much easier to wing it without a million people buzzing around the table.

I peeled the tomatillos, chopped the onion and garlic, and then started cubing up the bone-in pork shoulder. Ivan wandered back to camp and asked if I needed help. By that time, I did. It was hot and I was having a hard time remembering which hand didn’t have raw pork on it when I reached for my beer. I set him to roasting the chilis, which turned out to be brilliant decision because he remembered the paper bag trick. While that was going, he started to saute the onions and garlic. Then we browned the meat… Ivan stripped the skins off the peppers and we chopped them up.

I’d been looking for a bowl to put the meat in, and found the one leftover from pancakes that morning… still with a little batter dried on it. I figured it would help thicken the sauce. When Jim and Ivan started giving me shit about the dirty bowl, I pulled that out as my excuse and we got to thinking that it made pretty good sense. Good enough sense that Jim started working on a roux to add some real thickening. For some reason he went for the butter instead of the bacon grease, but whatever. Then he realized we had no flour… um, but we had Bisquick. That ought to work just the same, right?  So he whipped that up and we dumped it in (minus the bit he dumped on his foot. ouch). I think there is something about adding that at the end, but it seemed to work. 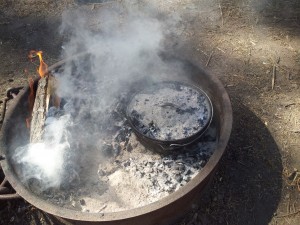 We loaded the dutch oven up with all this good stuff and stuck it in the fire. Learning from last time, I pushed most of the flaming wood to one side and just had a few coals around it. After about 20 minutes, I noticed a lot of steam hissing out, so I moved most of the remaining coals away. It was still plenty hot in the fire ring.

After an hour and a half, it was pretty amazing. The sauce had a depth of color with deeper browns rising up as it was stirred. The pork was tasty and tender, but not yet falling apart. We gave it another hour and it was sensational. For dinner we served it with tortillas, guacamole, cheese, salsa, and sour cream. Some radishes would have done well. We also had corn on the cob, which would have been even better sliced up and added to the tacos. 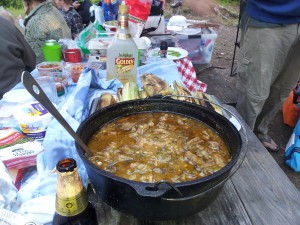 I ate two or three tacos to many and almost didn’t have room for a s’more. But it was camping, so I couldn’t really miss that.

6 lbs pork shoulder or butt, chopped into 1 in cubes

flour and butter for roux (can also use masa)

Bacon grease to saute in. Butter works too.

Cilantro and limes and other stuff to eat it with.

Roast the chilis over the fire until the skins are black, then put in a paper bag to steam… after a few minutes the skins will slide off easily. Dice.

Meanwhile, cut up the pork and toss the cubes with the spices.

Saute the onion and garlic in bacon grease.

Brown the pork in the bacon grease.

Mix up the butter and flour to make a roux. According to Jim, you should keep this off your feet if you are wearing sandals.  -UPDATE: in a later iteration, I added about 3 Tbls of masa mixed with the broth which worked great.

Add everything back to the dutch oven.

Pile up some coals so that it simmers… don’t let it boil too much. If you see steam hissing out all over the place, take off the coals that are piled all around it.

Simmer for 2-3 hours. Add more broth or beer if it starts to get dry.

It’s good served with rice. It’s good served as tacos. It’s just good. If you have more sauce than pork, you can grill up some chicken the next day and make enchilladas.

*Note: it would be even better with a few jalapeños thrown in for heat, but we had lots of little kids around who would have disagreed with me.