I’m seriously sick of food safety. I mean, yeah, salmonella and all that shit is bad, sure. And I know. I haven’t drank milk since the most miserable 24 hours ever in 1991, but I feel like it swings too far. Rather than finding ways to actually keep us safe, they just tell us to cook the living shit out of everything and  we’re missing out on some good stuff.

To wit, stuffing. Read the FDA or any sane food site and all this week they are babbling on about how you’re not supposed to stuff your fucking turkey because it’s a cesspool in there and stuffing is like giving a love nest so bacteria can get down to making little bacteria babies. I’m guessing they are probably right and all, but they miss the point.

And I’m going to get off the point while I point out something that truly did make me feel queasy while reading the USDA website to make sure I wasn’t making all this up: Pre-stuffed frozen turkeys. That sounds gnarly. If you have to buy shit like that, you should go to Red Lobster for Thanksgiving dinner. It’s bound to be an improvement.

But I digress. Where was I? Oh yeah: the USDA miss the point.

“For optimum safety, stuffing a turkey is not recommended. For more even cooking, it is recommended you cook your stuffing outside the bird in a casserole.” Um, sure. But I’ve never sat down and said “My but this stuffing is cooked evenly!” like some chipper food safety inspector. I have said “This stuffing is fucking awesome!” But more and more I’ve had to say “You cooked the stuffing outside of the bird, didn’t you?” because it tastes dry and safe.

Speaking of safety, the USDA goes on to remind me that, cooked outside the bird in a casserole dish,   “The stuffing must reach a safe minimum internal temperature of 165 °F.” Like Hell. It’s bread, covered with butter. You can eat it raw. Seriously. This makes me distrust all this safety bullshit.

And safety just gets us to crazy-talk. Such as:

“If you choose to stuff your turkey, the ingredients can be prepared ahead of time; however, keep wet and dry ingredients separate. Chill all of the wet ingredients (butter/margarine, cooked celery and onions, broth, etc.). Mix wet and dry ingredients just before filling the turkey cavities.” What the hell? I can see how play-it-safe-pussies recommend not stuffing a salmonella-infested carcass with a nutrient broth and incubating it for 4 hours — I think it sucks, but I understand why they have to say it. But now they are telling me that a mixture of melted butter, canned broth, and vegetables must be kept separate from the bread media or something is going to grow there, too. Jeezus.

Where I am going with all of this is that bread and vegetables and herbs and their ilk jammed into the dead bird is probably the best part of thanksgiving. I’ve watched it. You put the 2 dishes on the buffett… the big casserole dish of safety stuffing and the smaller bowl of inside-the-turkey goodness and watch which one vanishes. Though apparently there are some out there who think this whole stuffing thing has gone too far… I don’t know what to do with people like that except to invite them over for dinner and watch what they put on their plate.

Um. The problem with this rant, though, is that I’m smoking the turkey this Thanksgiving. Smoking a turkey that I brined for 12 hours. So no stuffing there. I mean, I’ve never tried it, but completely ignoring safety concerns, the stuffing out of a brined, smoked bird probably tastes like a slice of bread soaked in saltwater with a cigar stubbed out in it. No thanks.

So it’s an experiment. If you read my previous post (oops, no you didn’t. I never posted that one. Later. I promise. But you can check this one). Anyway, I gave (will give?) a good description of smoking a turkey. It’s always tricky to figure out when it’ll be done. Unlike pork, I worry about overcooking it. And, previous diatribe aside, I’m skeptical of super low temperature smoking, which rules out the overnight game I’m most fond of.

But this gives me an idea; I’ve often heard that all the smoke flavor gets in there in the first couple of hours. So I’ll smoke it for about 4 hours at 225°F, just to get the smoke flavor in there. Then, I’ll pull it out and finish it off in the oven at 325°F for another hour or so until it’s done. Here’s the plan: when I pull it off the smoker, I’m going to dump it into a giant pile of stuffing. I figure all the good turkey juices will run into it, and we’ll see what we get.

Now, we’ve got a stuffing plan: Suzanne has whipped up an awesome mix out of a week-old loaf of country potato bread she made. Sauteed mushrooms, cranberries, water chestnuts. I actually eat about a pound of it while she’s cooking it and it’s good. An hour under the turkey and it’ll be fantastic. The only problem is that she thinks mine is a dumb idea for unspecified reasons, so, apparently, her stuffing is not available. I’ve got 15 minutes before the store closes so I skedaddle. I buy a bag of the cheap stuffing mix and an onion. We’ll have a lot of stuffing anyway and I’ve got a lot on my mind without working overtime to make this experimental batch all fancy.

I brine the bird for 12 hours, then rinse it and let it sit in the fridge for another 18 hours. Rumor has it that this lets the brine diffuse deeper into the meat without over-salting the outside. Might make sense? Who knows; I’ve done it both ways and the rest always makes for a better bird.

When I fire up the smoker in the morning, I’m displeased to get an error message. EEE1. Thanks. I download the manual and hear that it is a “sensor burnout” and that I should “check the sensor.” Great. The sensor is some cheap piece of shit I got off eBay direct from Hong Kong. It was marketed as a thermocouple, but when it got here, it had 3 wires and no diagram. I eventually got it hooked up, but I’m not shocked to hear that it’s now burnt out. By the time I’ve read all this, though, I go check on it and the error has cleared. It says that the ambient temperature is 1,152°F, but that’s an improvement. By the time I’ve loaded the bird, it’s within 20°F of normal, which is as good as it’s ever been. I’ve got a separate temperature probe connected to the logging program, so I figure I’ll just keep an eye on both and start cooking. It’s a windy day, so I have to build a plywood wall to get it up over 200°F, but then we’re all good.

Too good, in fact. The bird is cooking fast. By the time I’d planned to take it off for the finish in the oven, the thigh is at 175 and the two breast probes are reading 155 and 170. Damn. And I haven’t made the stuffing yet. I chop up the onion I bought, plus some celery and have something that resembles stuffing in about 10 minutes. It isn’t nearly as good as the stuff Suzanne made, but that probably makes this a better test; awesome stuffing in a casserole dish vs. bland crap sitting under a turkey. I pull the bird off and drop it onto a roasting rack over the pile of stuffing, tent it with foil and put it in the oven at 200°F to await dinner. 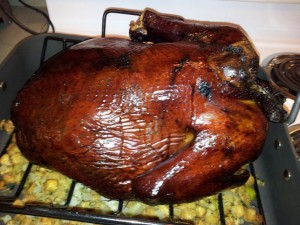 As it happens, another turkey, complete with stuffing, shows up at the party. This is a good thing, since it means more leftovers + chances to make comparisons. Jim (other turkey cooker) knows what he’s doing. We talk brining while Justin mashes potatoes. Time to carve. I scoop the now-soggy pile of stuffing out from under the bird, toss it into a 9×9″ dish and pop it into the oven to keep warm. But not before I taste it. We have a winner.

Jim and I start cutting our birds. He goes with the traditional slice, while I cut the breasts completely off, then cut them cross-wise. I’m not sure I know which I like better. We swap tastes and pretty much agree: mine’s got the smokey awesomeness and his has the not-overcooked tenderness. Thanks to great brining, mine isn’t dry, just a little tougher. And tastes friggin’ great.

The stuffing gets served up and it’s like I said before; Suzanne’s tastes great for sure. But mine’s got that been-in-the-bird-holy-shit-this-is-good thing going for it and collects kudos.  Someone actually said “This stuffing is fucking awesome!” Suzanne even admits it. Next year, her homemade bread is going under the turkey. Actually, there’s no way I can wait that long. Did I mention that I love Thanksgiving dinner?

It’s now been more than 24 hours and no one got violently ill, so I think the food safety concerns were not a real problem either.

Finally, I’d just like to give thanks. To the 7 people who each cooked something to turn a meal into a feast. To Sharalyn who had us all over her kitchen. And to the 2 turkeys that featured prominently in our meal, but didn’t enjoy it much.